Corn on the cob is a real treat and nothing beats the taste of home grown sweet juicy cobs. Corn comes from Central America and has been eaten for thousands of years. It’s a fast growing annual that’s easy and fun to grow for adults and children alike.

Most store bought seeds are modern hybrid varieties however there are interesting heritage varieties available that are very tasty and worth growing. Supersweet ‘Max’ is a popular variety or look for ‘Anasazi’ with its combination of red, white and blue kernels!

How To Grow Corn
Choose a warm full sun position with protection from strong winds.  Corn is a heavy feeder so the soil needs to be enriched with plenty of organic matter to ensure a good crop eg manure and compost. Test the pH and add some eco-flo dolomite or eco-flo lime if the soil is too acidic. Corn likes a slightly acid to neutral soil.

Best results come from seed sown directly into the garden bed and there are many varieties to choose from – just be sure to use seed before its expiry date as it doesn’t stay viable for long.

Wait until all frosts have passed and soils have warmed up, then sow seeds 2-3cm deep. Plant in multiple short rows to form a block of plants rather than just one or two long rows. Corn is wind pollinated and fertilisation is higher when planted this way. Water in well with some eco-seaweed. Corn seeds are vulnerable to rotting at this early stage so do not water again until you see the shoots emerging 1-2 weeks later.

Once emerged make sure the plants receive plenty of water during their early growth stage. Lack of water early on can result in poor yields later.

Plants are shallow rooted so you can mound the soil up around the base of the plant as it grows to insulate against water stress and encourage more root development. Use sugarcane as a mulch to suppress weed growth and help with moisture loss.

Sowing Guide for Corn
Corn is a warm weather crop so sow after the last frosts have definitely been and gone.

Fertilising & Harvesting Corn
As we said previously corn is a hungry crop so to keep it growing strongly and increase yields give fortnightly applications of eco-seaweed and eco-aminogro. You can also add more manure or a pelleted organic fertiliser midway through the growing period particularly if growing in poorer soils.

Depending on the corn variety chosen you’ll be harvesting in 10-16 weeks.  When the silks on the ends of the corn ears turn brown and start to dry off they’re ready for picking.  Another way to tell is to pull back a few leaves and expose some kernels. If they are plump and exude a milky fluid when popped the corn is ready.  If the fluid is watery then it needs longer on the plant. Twist the ears in a downward motion to cleanly remove them from the plant.

As a general guide ears are ready to harvest 2-3 weeks from when silks appear.  Check regularly because if left too long on the plant the cob won’t be as sweet to eat and can start to go a bit tough.

‘Popping’ corn is grown the same way but using special popcorn varieties. Leave the corn ears on the plant until the leaves around the cob have gone brown and dried out.

Pest & Disease Problems of Corn
The main problems associated with growing corn are : 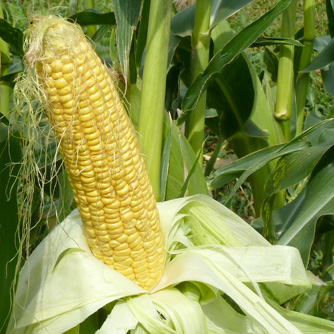 Nothing beats freshly picked corn from the garden 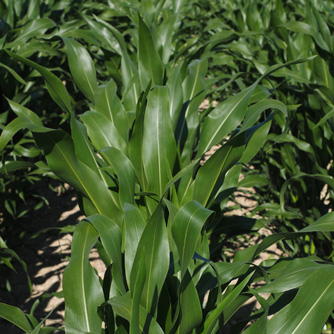 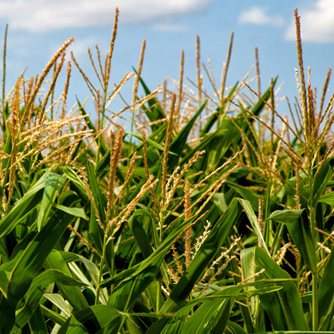 Male flowers release pollen from the top of corn stalks 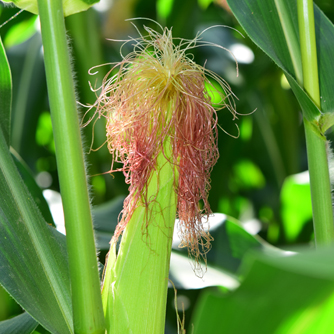 Silks emerging from the corn ear ready to be fertilised