Warrigal Greens (Tetragonia tetragonioides) is a delightful native ground cover with fleshy green leaves that thrives in poor growing conditions. It naturally grows in sandy coastal locations which challenges many other plants so it really is a tough groundcover!

It does have a bit of an identity crisis though as it’s also known as Botany Bay spinach or New Zealand spinach. Yep it’s a native to New Zealand too and given these other common names you’ve probably guessed it’s also edible. The leaves are lovely steamed and used as a substitute for regular spinach.  Just note that the leaves are high in oxalates so they should always be cooked before eating.

How to Grow Warrigal Greens
Warrigal greens are tolerant of both poor soils and poor growing conditions but good drainage is always essential. They are best grown in full sun except in hot arid climates where a little shade is beneficial. They can handle light frost and salty coastal conditions.

In mild coastal climates Warrigal greens just keep growing but in hot subtropical and tropical regions vigour can drop through the wet season. In very cold areas it should be considered an annual.

Warrigal greens can be purchased as small plants from nurseries. Plant them in a sunny spot and water in with OCP eco-seaweed to reduce transplant shock. Alternative sow seeds either direct or in punnets to be planted out later. They will also strike easily from cuttings if a friend is already growing some. 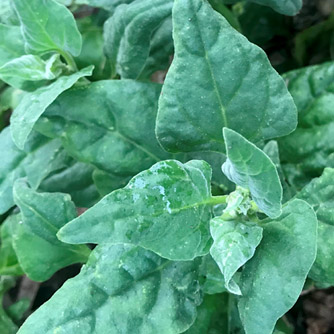 The succulent leaves of Warrigal greens

Fertilising Warrigal Greens
In their natural setting plants get by on very little so you can neglect them completely. However if you want them looking their best (lush and green) regular feeding and watering is the way to go. Every 2-4 weeks during the warmer months apply a combination of OCP eco-seaweed and OCP eco-aminogro to give you lots of tasty leaves to harvest.

Pest and Disease Problems of Warrigal Greens
Generally plants are trouble free as a long as they have good drainage. 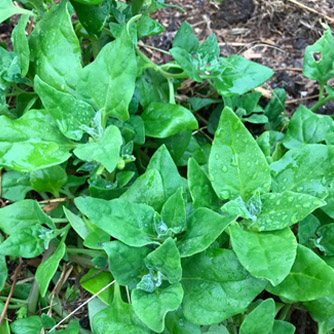 Warrigal greens will spread out and make a dense groundcover