Pumpkins are easy to grow but can need plenty of space especially if you grow the ‘Atlantic Giant’ variety which can weigh over 600kgs! Can you believe it? Now that’s a lot of pumpkin soup!

Technically speaking pumpkins are actually a fruit and there are lots of different types.  One of the most popular variety ‘Butternut’ is a great hit with the kids due to its sweet flavour. It is peanut shaped and grows well on a fence or trellis. For small gardens or containers choose ‘Golden Nugget’. Each plant will produce about 5-8 small round fruits with a bright orange skin. ‘Queensland Blue’ is another old favourite that develops green/grey skin and deep orange coloured flesh.

How To Grow Pumpkin
Pumpkins are a warm season plant and should only be grown after frosts are finished. Choose a full sun position in your garden with space to allow your pumpkin vine to spread out. For most varieties this means about 2-3m per plant.

Prepare the planting area by working in compost and manure as pumpkins do best in good soils.  Then boost calcium levels with some eco-flo dolomite or eco-flo lime. Next create a small raised mound and sow seed directly into the soil.  Put a couple of seeds per mound and thin out the weakest seedling later on. As a general guide three plants will be enough for the average sized family but it does depend on the type of pumpkin you grow and just how much you like to eat.

Water mounds with eco-seaweed and lightly cover with sugar cane mulch.  Seedlings will emerge within a week if soils are above 20 degrees.  The mulch will help to protect the growing vine and pumpkins from coming into contact with the soil and reduce fungal problems. Water plants well throughout their growing season and if possible do this in the mornings to further help keep fungal problems at bay.

In cooler regions seeds can also be started in pots to avoid late frosts. Be sure to handle seedlings very gently when planting out as they don’t tolerate root disturbance.  Try growing in a jiffy pot to minimise this issue.

Pumpkins can also be grown up a trellis or on fences which can be very handy if you’re short on space. Vines will need help to get started and some occasional redirecting to keep them where you want them. You may also need to stretch old stockings around forming fruit to help support the weight.

Frost Warning: When sowing direct ensure all risk of frost has passed as seedlings are easily killed by late frosts.

Tropical & Subtropical areas: While pumpkins can be grown all year they are generally easier throughout the dry season.  During the wet season you can experience increased fungal problems.

Fertilising Pumpkins
Pumpkins aren’t terribly hungry plants provided they’re growing in good soil. Add some compost and manure before sowing seed and then water young plants every 2 weeks with eco-seaweed and eco-aminogro to get them off to a great start. In poor quality soils you can top up the compost and manure 6-8 weeks later.

Calcium is also very important so apply eco-flo dolomite or eco-flo lime at planting time and again halfway through the growing season.

We particularly recommend applying eco-seaweed every two weeks right through the growing period to strengthen plants and reduce fungal problems.

Pollination of Pumpkins
One of the unusual characteristics of pumpkins is that they have separate male and female flowers on each plant which are mostly pollinated by bees. There are usually twice as many male flowers (with pollen coated stamens) compared to female flowers (with a slight swelling at the base).

Plant bee-attracting flowers around your veggie patch to improve pollination but if all else fails you can hand pollinate. Do this by picking a number of male flowers and brushing them inside the female flowers.

Harvesting Pumpkins
Pumpkins can be picked young and immature when their flavour is sweeter.  At this stage they are usually called squashes.  If you want proper sized pumpkins they take up to 12-15 weeks until they are ready to harvest (depending on the variety).

It’s a good idea to prune the trailing ends of vines once you have enough pumpkins developing so the plant puts all its energy into growing the existing fruit. As the pumpkins approach full size the stalk starts to dry out and often the vine begins to die down. Cut the pumpkins from the vine keeping about 5cm of stalk attached to the pumpkin.

If you plan to keep the pumpkin for a long time then it will need to be “cured”. Turn the pumpkin over and leave in the sun for a few days to ensure the skin has fully hardened and dried. Pumpkins can then be stored for many months in a dry, cool environment.

Pest and Disease Problems of Pumpkins
Even though pumpkins are pretty easy to grow there are quite a few problems that can occur: 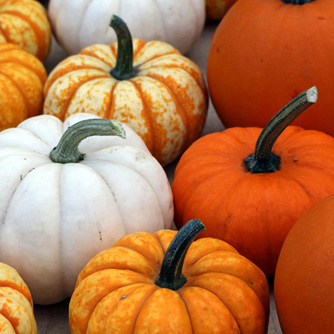 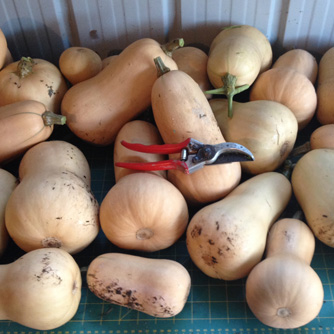 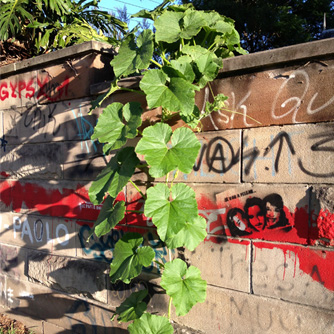 Pumpkin vines can be trained along fences rather just escaping :) 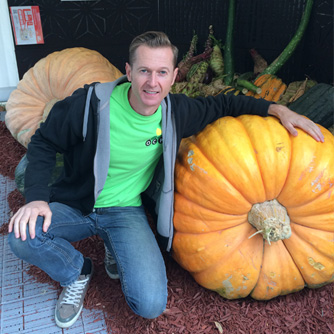 Now this is a pumpkin! 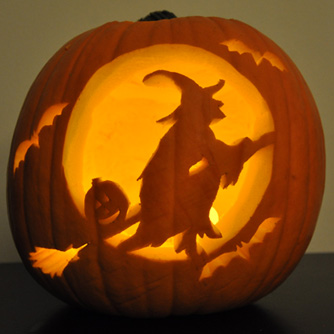 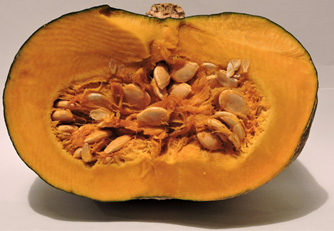 Pumpkin seeds can be saved and turned into nutritious snacks