Sooty mould looks just like the name implies – like a layer of black or grey fireplace soot over the leaves and branches.

It might sound strange but sooty mould is actually a problem caused by sap sucking insects like aphids, scale, whitefly, mealybugs and mites. These insects exude a sugary substance called honeydew which the sooty mould grows off.  Ants will also feed on the honeydew so it is common to see ants and sooty mould together on plants.  Aside from being unsightly the sooty mould can block sunlight to leaves and reduce plant vigour in severe cases.

To get rid of the sooty mould you need to address the pest problem. Once you have that under control and they are no longer producing the honeydew, the sooty mould will dry up and flake off.

Plants Attacked
All plants can be affected by sooty mould.

Identify what sap sucking insect is present and treat accordingly. If you can’t see any pests then there’s a pretty good chance of it being:

eco-oil and eco-neem will both control a broad range of sap-sucking insects.  Spray with either a couple of times to kill the pests.  Ensure good coverage all over the plants so you don’t miss any of the pests.

Once the sooty mould starts to dry and flake hosing can help to remove the flaky bits faster.

There are also various predatory insects which eat sap sucking insects but they sometimes take time to get established and bring the pests under control. If your sooty mould is severe then get on top of it quickly by spraying with eco-oil or eco-neem first.  You can learn more about beneficial insects in The Garden Guardians book.  We also sell a range of live predatory insects called the Backyard Buddies. 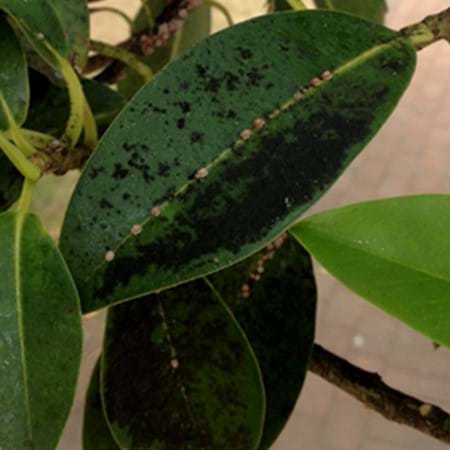 Sooty mould on fig leaves with scale along the middle