Philothecas are delightful, small to medium-sized shrubs which are native to Australia. A couple of species have been sold in nurseries for nearly a century but even so they aren’t that well know but certainly should be considering their beauty and usefulness in the garden.

Philothecas are known commonly as wax flowers but so are a few other native and exotic plants which can make things confusing. Some gardeners may also know them by their old name, Eriostemon, however all but two species have been moved into the Philotheca genus. So to be sure you get the plant you’re after it’s time to start calling them philothecas!

Philothecas produce small star-like flowers which cover the plant from late winter right through to late spring. These thick, wax-like flowers are white, pink or mauve and contrast beautifully with the decorative dark pink buds and deep green foliaged. They’re also loved by bees so they’re a valuable plant to add to the garden. In addition to the flowers the foliage is quite aromatic which some people appreciate more than others. If the smell appeals to you, plant shrubs along paths, allowing the release of oils as you brush past.

Philotheca Varieties
The main reason for growing philothecas is their spectacular, long-lasting flower displays but most varieties are also very dense and those that reach about 2m tall are suitable as screening plants or windbreak. Shorter varieties look lovely when they’re grouped in a bed or rockery with other cottage-garden style plants. Some are low-growing with a sprawling habit and make useful embankment plants as roots occasionally form stems that touch the ground, reducing the potential for erosion.

Although there are about 45 species of philotheca, there are only a small handful that are commonly cultivated. These include:

If you’re looking for a specific philotheca then a trip to a native plant nursery will usually give you the widest selection possible.

How To Grow Philotheca
Philothecas grow well in all climates but the tropics. They come from a variety of habitats including the sub-alpine and coastal heathland areas of south-eastern Australia right through to the semi-arid regions of Western Australia. Although some grow naturally in rocky, exposed conditions, many grow in open forests and thrive in dappled shade to full sun. East coast species are more tolerant of shade than those from WA.

Plants require a well-drained soil or they can be susceptible to root disease. If your soil is heavy clay, apply eco-flo gypsum and plant into low mounds to ensure adequate drainage. Regardless of soil type working through some compost before planting will also beneficial. Plants perform best in acid to neutral soils and most are tolerant of all but the heaviest frosts.

Plant to the same depth as the size of the pot but make the hole twice as wide as the pot. Plants grow much quicker in looser soil which is why it helps to make the hole wide. If there are any large clods then get in with your hands and break them up to ensure there are no big air pockets where roots could dry out.

Small varieties are highly suited to being grown in containers. Philothecas are happy to grow in regular potting mix and don’t require a specialised native mix.

Whether you’ve planted into pots or the ground, apply eco-seaweed as soon as you’ve planted them. This helps the soil or potting mix settle around the roots and reduces transplant shock.

Fertilising & Maintaining Philotheca
To keep new plants in tip-top shape apply eco-seaweed and eco-aminogro monthly. If want your plants to grow faster then increase to fortnightly.

Established plants can be fertilised in late autumn with an organic pelletised fertiliser, compost or layer of manure. Occasionally philothecas develop yellow leaves which can usually be corrected with a couple of doses of eco-aminogro . If the yellowing persists check the soil pH level as alkaline soil can cause iron deficiency in these plants.

Once established in the ground plants shouldn’t require additional watering except during extended dry periods. Plants in pots however will need frequent watering just like most potted plants.

Philothecas look best when they’re dense and evenly shaped. To encourage this and prevent them from becoming leggy, tip prune at planting time by removing 1-2cm off each stem. When their main flowering flush has finished remove at least another couple of centimetres of growth all over. This will help create a well-shaped shrub.

Propagating Philotheca
Unless you’re a native plant enthusiast you’re best off just buying an existing plant from the nursery as propagating can give mixed results. If you’re up for the challenge then stem cuttings are the way to go. Semi-hard cuttings are the most common type taken (young wood which is still has a good amount of flex). If available, bottom heating is beneficial. Ensure cuttings are kept moist but not wet and are out of direct sunlight. Cuttings may take a few weeks to set roots. Success of stem cuttings will vary but dipping the cutting end in raw honey may increase the strike rate.

Philotheca seeds contain germination inhibitors and generally only germinate if the seed coat is nicked and the seeds are placed in running water for 10-20 days.

Philotheca Cut Flowers
Sprigs of philotheca flowers look gorgeous indoors and emit a lovely citrusy aroma but they aren’t particularly long-lasting. To get the best out of them, strip the foliage from the bottom half of each stem, recut 2cm off the base and immediately place in water. Avoid bashing the stems. Replace the water every couple of days.

Pests and Diseases of Philotheca
Generally philothecas aren’t subject to many pests or diseases. There’s just a couple of things to watch out for: 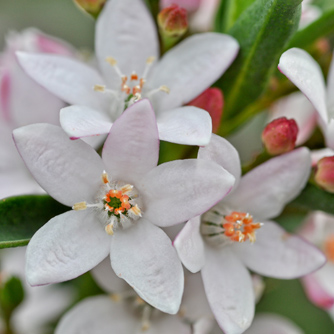 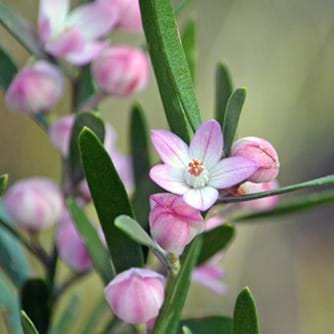