Banksias are named in honour of botanist Sir Joseph Banks and are popular Australian natives due to their impressive flower spikes consisting of hundreds of smaller flowers.  The nectar laden flowers are perfect for attracting bees and birds into your garden plus they also make great cut flowers indoors where they’ll release their honey scent.

There are more than 170 species of banksias with all but one being endemic to Australia and they range from ground covers to tall trees. Flowers are yellow, orange, pink and red and many have beautiful serrated leaves. Probably the most common species grown in the home garden are Banksia spinulosa, Banksia speciosa and Banksia ericifolia while the cultivars ‘Giant Candles’ and ‘Birthday Candles’ are also popular with their prolific flowering.

How to Grow Banksias
Choose a sunny position where the soil is free draining to avoid them developing root rot. They are quite happy in sandy soils but will appreciate a little organic matter being added.  Clay soils will definitely need improving with eco-flo gypsum and you should also raise the garden bed to assist with drainage.  Apply eco-seaweed in the first few weeks to help settle the banksia into its new home.

Banksias lack a main taproot and can take two years to fully establish themselves. Keep an eye on them for their first two summers and provide extra water during hot periods if needed.  After that they’ll be quite drought resistant.

If you want to grow banksias from seed the good news is the seeds are very viable and will easily germinate in a few days. Extracting the seed from the cone however is the tricky part! They are deep inside the cone and the capsules only open after exposure to high temperatures eg bushfires. To mimic this place the cone in an oven for 1-2 hours at 100-150 degrees Celcius and the capsules will open releasing the seed. Watch that the cone doesn’t catch alight.

Sow the seed either directly into a garden bed or in very free draining native potting mix. Water in with eco-seaweed and before you know it, you will have baby banksias!

Fertilising Banksias
Banksias have special roots called proteoid roots which help them to grow in our low nutrient Australian soils. As such they require little fertilising and are particularly sensitive to high levels of phosphorous, especially when they are young. Once or twice a year apply a certified organic fertiliser which is labeled safe for natives or has a phosphorus content less than 2%.

If you have young plants that you want to push along then apply a mixture of eco-seaweed and eco-aminogro every 2-4 weeks as these are safe for all natives.

Pruning Banksias
Generally banksias require little pruning. Simply trim off any dead branches which may appear and prune back to restrict the size/shape if needed. You can cut off the finished flower spikes if you like but when left to age on the plant they become quite striking in their own right.

Pest & Disease Problems of Banksia
Banksias are easy to grow plants but here’s a couple of problems to watch out for: 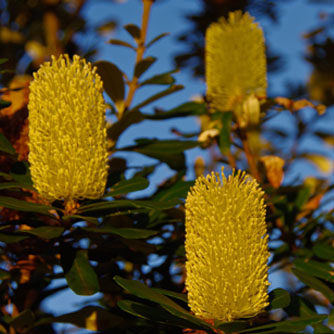 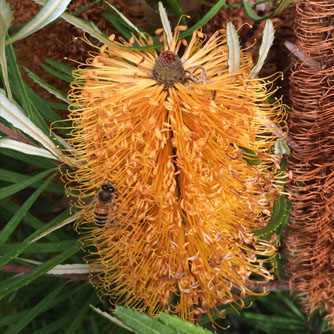 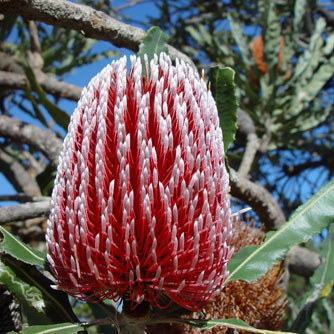 The stunning Banksia menziesii from WA 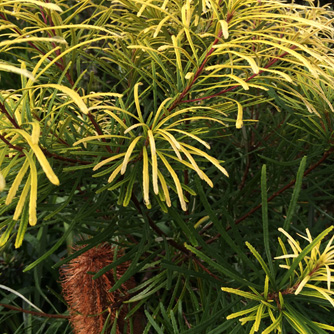